Earlier this year, 12,000 people in San Francisco signed a petition in support of a proposition on a local ballot to rename an Oceanside sewage plant after George W. Bush. The proposition is only one example of the classless disrespect many Americans have shown the president. 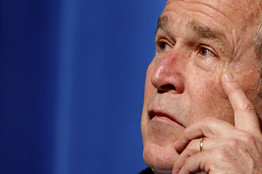 According to recent Gallup polls, the president’s average approval rating is below 30% — down from his 90% approval in the wake of 9/11. Mr. Bush has endured relentless attacks from the left while facing abandonment from the right.

This is the price Mr. Bush is paying for trying to work with both Democrats and Republicans. During his 2004 victory speech, the president reached out to voters who supported his opponent, John Kerry, and said, “Today, I want to speak to every person who voted for my opponent. To make this nation stronger and better, I will need your support, and I will work to earn it. I will do all I can do to deserve your trust.”

Those bipartisan efforts have been met with crushing resistance from both political parties.

The president’s original Supreme Court choice of Harriet Miers alarmed Republicans, while his final nomination of Samuel Alito angered Democrats. His solutions to reform the immigration system alienated traditional conservatives, while his refusal to retreat in Iraq has enraged liberals who have unrealistic expectations about the challenges we face there.

It seems that no matter what Mr. Bush does, he is blamed for everything. He remains despised by the left while continuously disappointing the right.

Yet it should seem obvious that many of our country’s current problems either existed long before Mr. Bush ever came to office, or are beyond his control. Perhaps if Americans stopped being so divisive, and congressional leaders came together to work with the president on some of these problems, he would actually have had a fighting chance of solving them.

Like the president said in his 2004 victory speech, “We have one country, one Constitution and one future that binds us. And when we come together and work together, there is no limit to the greatness of America.”

To be sure, Mr. Bush is not completely alone. His low approval ratings put him in the good company of former Democratic President Harry S. Truman, whose own approval rating sank to 22% shortly before he left office. Despite Mr. Truman’s low numbers, a 2005 Wall Street Journal poll found that he was ranked the seventh most popular president in history.

Just as Americans have gained perspective on how challenging Truman’s presidency was in the wake of World War II, our country will recognize the hardship President Bush faced these past eight years — and how extraordinary it was that he accomplished what he did in the wake of the September 11 attacks.

The treatment President Bush has received from this country is nothing less than a disgrace. The attacks launched against him have been cruel and slanderous, proving to the world what little character and resolve we have. The president is not to blame for all these problems. He never lost faith in America or her people, and has tried his hardest to continue leading our nation during a very difficult time.

Our failure to stand by the one person who continued to stand by us has not gone unnoticed by our enemies. It has shown to the world how disloyal we can be when our president needed loyalty — a shameful display of arrogance and weakness that will haunt this nation long after Mr. Bush has left the White House.

Mr. Shapiro is an investigative reporter and lawyer who previously interned with John F. Kerry’s legal team during the presidential election in 2004.

This site uses Akismet to reduce spam. Learn how your comment data is processed.