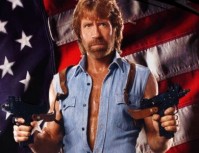 I like “Chuck Norris can light ants on fire with a magnifying glass. At night.” the best so far.

You’ve got to love Nor-verbs…

• If you ask Chuck Norris what time it is, he always says, “Two seconds
’til.” After you ask, “Two seconds ’til what?” he roundhouse kicks you in
the face.
• When Chuck Norris sends in his taxes, he sends blank forms and
includes only a picture of himself, crouched and ready to attack. Chuck
Norris has not had to pay taxes, ever.
• The quickest way to a man’s heart is with Chuck Norris’ fist.
• Chuck Norris can win a game of Connect Four in only three moves.
• What was going through the minds of all of Chuck Norris’ victims
before they died? His shoe.
• Chuck Norris is the only man to ever defeat a brick wall in a game of
tennis.
• The opening scene of the movie “Saving Private Ryan” is loosely based
on games of dodgeball Chuck Norris played in second grade.
• Contrary to popular belief, America is not a democracy, it is a
Chucktatorship.
• Faster than a speeding bullet … more powerful than a locomotive …
able to leap tall buildings in a single bound… yes, these are some of
Chuck Norris’s warm-up exercises.
• Chuck Norris can divide by zero.
• In ancient China there is a legend that one day a child will be born
from a dragon, grow to be a man, and vanquish evil from the land. That man
is not Chuck Norris, because Chuck Norris killed that man.
• Chuck Norris’s body temperature is 98.6 degrees… Celsius.
• The grass is always greener on the other side, unless Chuck Norris
has been there. In that case the grass is most likely soaked in blood and
tears.
• When an episode of Walker Texas Ranger was aired in France, the
French surrendered to Chuck Norris just to be on the safe side.
• When Chuck Norris talks, everybody listens. And dies.
• When Steven Seagal kills a ninja, he only takes its hide. When Chuck
Norris kills a ninja, he uses every part.
• Chuck Norris always knows the EXACT location of Carmen SanDiego.
• Chuck Norris invented black. In fact, he invented the entire spectrum
of visible light. Except pink. Tom Cruise invented pink.
• Chuck Norris has the greatest Poker-Face of all time. He won the 1983
World Series of Poker, despite holding only a Joker, a Get out of Jail Free
Monopoloy card, a 2 of clubs, 7 of spades and a green #4 card from the game
UNO.
• Nobody does it like Sara Lee. Except Chuck Norris.
• Chuck Norris grinds his coffee with his teeth and boils the water
with his own rage.
• Chuck Norris ordered a Big Mac at Burger King, and got one.
• Chuck Norris and Mr. T walked into a bar. The bar was instantly
destroyed, as that level of awesome cannot be contained in one building.
• Little known medical fact: Chuck Norris invented the Caesarean
section when he roundhouse-kicked his way out of his mother’s womb.
• Chuck Norris has a deep and abiding respect for human life… unless
it gets in his way.
• Chuck Norris once ate an entire bottle of sleeping pills. They made
him blink.

This site uses Akismet to reduce spam. Learn how your comment data is processed.